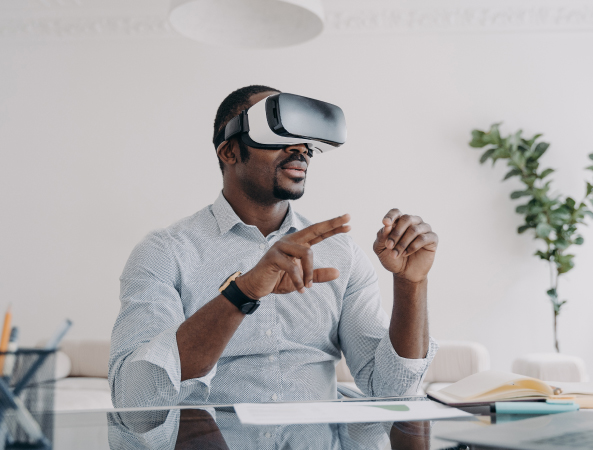 There are many misconceptions, and some vagueness, surrounding the Metaverse. This prompted the compilation of a short series of articles to demystify it, explain how it works, and address its potential real-life implications. So here is the first of many articles in our Metaverse 101 series…

One of the most trending topics is how “Facebook’s Metaverse is going to change the world as we know it.” The truth is that Facebook is just one of many major companies investing heavily in the Metaverse – spending at least $10 billion this year alone on its Metaverse division.

With that kind of investment, one can understand Facebook wanting to take ownership of the Metaverse by changing its company name to Meta. However, this has caused confusion. To be clear, Facebook is still Facebook, as is Instagram, and WhatsApp. They all just fall under Meta’s umbrella.

The Metaverse has been evolving on multiple platforms (many of its features are old-hat for avid gamers), and Meta is simply plugging into it and contributing to its evolutionary process.

The technology behind the Metaverse

Before we continue, we need to be armed with some basic knowledge surrounding Augmented Reality (AR), Virtual Reality (VR), Mixed Reality (MR), and those Non-fungible Tokens (NFTs) everyone keeps talking about.

1. Augmented Reality: This is an interactive experience that looks at the world through your smartphone’s camera, and a digital overlay is added to what you see. The trend of everyone chasing Pokémon through the park with their cell phones was a good example of augmented reality. Other examples include Snapchat and Google AR.

2. Virtual Reality: This is an immerse experience in a completely digital environment through a VR headset that shuts out the real world around you. Meta’s Quest 2 is an example of one of these devices. It can be quite dizzying before you acclimatise to it.

3. Mixed Reality: As the name implies, mixed reality combines the Real, AR and VR experiences. Think of it as an interaction between digital objects and the real world. To better visualise this, take a look at Microsoft’s HoloLens as well as the below infographic.

4. Non-fungible Tokens: An NFT is a digital asset that represents real-world objects like art, music, in-game items and videos. They are bought and sold online, frequently with cryptocurrency, and they are generally encoded with the same underlying software as many cryptos.

Now that we’re all on the same page, let’s scroll right in…

So, what is the Metaverse?

Essentially, it’s a network of all-encompassing 3D virtual worlds. In futurism and science fiction, it is often described as a hypothetical iteration of the Internet as a single, universal, virtual world that is facilitated by the use of virtual and augmented reality headsets. Social connection is a big driver behind it and this isn’t as ironic as it sounds. Humans crave connection as a basic need. The thought of fulfilling that need when we are out of reach, or even working from home, is appealing. It’s no coincidence that amidst lockdowns and varying degrees of social restrictions, the Metaverse has gained momentum.

“Metaverse” was coined by Neal Stephenson in his 1992 science fiction novel, ‘Snow Crash.’ Aspects of the Metaverse concept were later explored more visually in the Hollywood Blockbuster, ‘Ready Player One.’ (based on Ernest Cline’s novel of the same name)

(Definitely worth a watch. I found myself revisiting it after the Metaverse hype picked up).

The Metaverse is a platform and there are many Metaverses (platforms) that exist, each with their own set of rules and infrastructure. Currently in its infancy, the Metaverse is a multi-person virtual reality hangout that, at the moment, looks pretty much like an enhanced version of the game Minecraft. The graphics are nowhere near the photo realism that so many Metaverse marketing videos allude to.

The future of the Metaverse

The truth is that it is not really defined and as time goes by there will be more clarity. Many companies have somewhat different interpretations of what the future will be. I believe this future will depend on its enabling technology, which will need to progress to reach the levels of depth and detail we want from the immersive experience.

For fear of missing out, many companies are jumping in gung-ho, but as of recently investors are starting to ask the hard questions around the promotional videos they have been shown compared to the actual progress being made.

Facebook’s promotional videos depict how a future mixed-reality might look – overlaying technology in the current environment and seamlessly jumping into virtual reality to connect. We are a good couple of years away from this and one of the main barriers to entry will be discussed in more detail further down.

The truth is that no one really has the crystal ball view.
Only as the technology evolves will we eventually gain more clarity.

There are many different metaverses available at the moment. In fact, some have been around since 2012! The one thing that needs to be taken into consideration is that each of the Metaverses have their own guidelines, governance and economic currency. Here are just a few in the current overwhelming list of Metaverse Platforms…

Founded in 2017 and launched in 2020, this was one of the first viable Metaverse platforms. Not only can users interact with others, but they can earn and purchase digital assets with its own unique cryptocurrency called MANA.

Much like Decentraland, users can do it all in The Sandbox. The currency here is SAND. Big brands are already opening virtual stores here, including Gucci.

This platform is free to use, with in-game purchases available. Exponential growth in users recently caused a 75 hour outage.

Frequent users of this Metaverse platform are known as “Bloktopians” and make purchases using BLOK tokens.

VR, Web, PC, and Mobile interfaces make this platform highly accessible. Want to ‘live forever?’ Users can leave an auto recording of themselves on their property to be analysed by future AI, intent on ‘bringing your Avatar to life.’

Available in VR and on PC, users can tap into an extensive marketplace for all their digital assets (Starting to see the trend here?).

Meta’s highest-profile bet right now is a social VR platform for the Quest headset called Horizon Worlds. Horizon Worlds lets users build custom environments to hang out and play games in as legless avatars. Meta announced this week that 10,000 separate worlds have been built in Horizon Worlds to date.

How do you enter the Metaverse?

To truly experience the Metaverse one would need to purchase a VR headset. The VR headset allows you to become fully immersed and able to interact with the environment (AKA: Six Degrees of Freedom). Depending on the headset you have, you can communicate with others through your chosen avatar and engage all your senses. In the future, you may even wear gloves or body suits that promote a more tactile experience.

Your smartphone, tablet and laptop is enough to enter a metaverse. You’ll however be missing out on the immersiveness of the metaverse, which is the real differentiator from normal 3dof (Three Degrees of Freedom) VR and other 2D simulators. This feels more like looking through the window than living the experience, which ultimately is the end goal here.

The demand for VR has grown significantly, with the VR market expected to grow to $12.19 Billion by 2024. This is a trend likely to continue as even more companies move into the virtual space – there are rumours that Apple is working on VR technology too.

Meta’s ‘Quest 2’ remains the most sought-after headset on the market. (Note: Oculus was acquired by Meta – thus the Oculus Quest 2 rebranding as the Meta Quest 2). The obvious barrier to entry here is the price: The 256GB model costs roughly $400 USD overseas but about R14 000 locally in South Africa.

Dependence on VR technology has limited metaverse development and wide-scale adoption. Currently, the true VR experience is only available to those who can afford the device as well as the cost of data and a stable/fast internet connection (more so an issue in South Africa). However, the technology costs should reduce over time and become more affordable to the mass market. There’s still a lot for us to unpack here. Keep an eye out for the next in my series of Metaverse articles.

Your business in the Metaverse

If you are interested in ‘getting in’ on the Metaverse to stay ahead of the pack, try to define a need and then see how the tech can be bent to meet that need – rather than simply plugging in to see what it offers. This is how the platform will evolve, and it’s the best way for you to leverage off it.

About the author:
Imtiyaz Mohamed is a Principle consultant at Realm Digital – creating and implementing business strategies focusing on future growth, innovation and technology trends. He is passionate about strategy and innovation, linking it toward value creation for clients and stakeholders.